As anyone who’s either watched American Idol this season or paid attention to rock music over the last 40 years can attest, Aerosmith frontman Steven Tyler is capable of some outrageous behavior. Naturally, his memoir, Does The Noise In My Head Bother You? (Ecco), is loaded with enough badass tales of sex, drugs, and rock’n’roll mayhem to make Keith Richards’ autobiography Life look choirboy-cute by comparison. Is it a sharply written masterpiece? Far from it. Is it a fun read? You betcha. For the benefit of all you CliffsNotes fans out there, we’ve compiled the book’s wildest and weirdest revelations.

1: Did the dude look like a lady? Tyler isn’t saying, but he does admit to having a homosexual tryst in his youth. “Gay sex just doesn’t do it for me,” he reveals. “I tried it one time when I was younger, but just didn’t dig it.”

2: Tyler was rehab buddies with rock royalty (sort of). In December 2009, after another drug relapse, Tyler checked into a Betty Ford clinic. When he arrived, Tyler recalls being greeted by Ivan Followill, the father of the Kings of Leon’s Caleb, Nathan, and Jared. “His kids didn’t like the way their dad was behaving,” Tyler writes. “He’d remarried and they hated his new wife, he was getting drunk all the time, running trucks and buses off the road — he was the band’s tour manager — just fucked up shit. So they sent him to rehab, and so I spent the next month in the best of company with the Kings of Leon’s dad.” 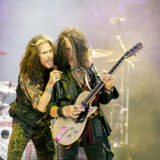 3: Tyler was contacted by Led Zeppelin’s Jimmy Page in 2008 with an offer to form a band with ex-Zep members Page and John Paul Jones, as well as John Bonham’s son Jason. The quartet rehearsed once, “but I soon realized it wasn’t going to work,” writes Tyler. “Not that I couldn’t sing the stuff, I could do Led Zep in my sleep, but I wasn’t Robert Plant, and Robert wasn’t anything like me. Fans want to hear ‘Percy’ [Plant’s nickname] wail on ‘Whole Lotta Love,’ ‘Communication Breakdown,’ etc. It never would have been the same.”

4: Tyler knows his drugs, which isn’t exactly a shocker, but the range of narcotics with which Tyler is familiar is impressive in an encyclopedic kind of way. Here are some of the uppers, downers, and in-betweeners that get mentioned in Noise: Seroquel, Neurontin, Xanax, Benzodiazepine, Valium, Librium, Cocaine, OxyContin, Lunesta, Suboxone, Dexedrine, Benzedrine, Marijuana, Heroin, Tuinol, Methamphetamine, Seconal, Amyl Nitrate, Laudanum, Quaaludes, Dilaudid, Methadone, Clonidine, LSD, Hashish, Opium, etc., etc.

5: This stick-thin, anti-establishment hell raiser was actually a bit of a jock. “I had been on the junior Olympic team in high school for trampoline; I could do twenty-six back flips in a row.” [Editor’s Note: Trampolining became an Olympic sport in 2000.]

6: Tyler and Joe Perry have shared some very, uh, intimate experiences. “I remember one night on the road when Joe and I were sharing a bed with two girls and woke up in the morning with a seafood blue plate special… Crabs for everybody!”

7: Aerosmith wasn’t always loved by its road crew. “I found out years later (through a crew member confessional) that when the techs would get pissed off at the band, they’d wipe their ass with the bologna and put back on the deli tray.”

8: During their ’70s heyday, Aerosmith didn’t always wait till after the show to party. “Joe [Perry] had vials of coke with straws in them at the back of the stage, and when the lights would go out he’d go over there like he was checking something or making a guitar change and [a roadie] would put the straw in his nose; he’d take a hit, then the lights would come on again.”