Rock's shape-shifting drama queenie would prefer to let her music do the talking. 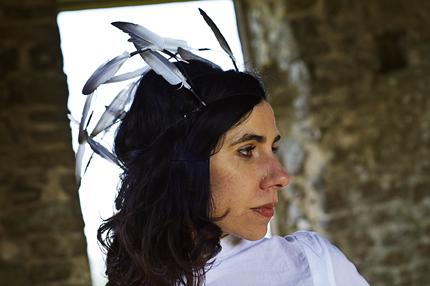 On this chilly February morning, Polly Jean Harvey walks into a fairly clinical West London hotel conference room with a steady and all too palpable reluctance. Tiny and birdlike, and dressed entirely in black, she conjures up a smile that lasts less than a second, then folds herself neatly into her chair, chin tucked into her chest, eyes downcast.

Unlike so many other modern artists, PJ Harvey is a throwback to another time, someone who would rather leave most things unsaid. So, no, she doesn’t tweet. The very fact that she must occasionally break her silence — invariably on the occasion of a new album — disconcerts her greatly.

“I do find it difficult talking about my music,” she admits, carefully pouring herself a glass of water from the bottle in front of her but neglecting to drink from it. “Many artists do. The work, you see, is already done. There it is. What else is there to say?“

But it’s worth attempting to break down these defenses, because there are few songwriters at work today quite as arresting as Harvey. Her recently released eighth album, Let England Shake (Vagrant), is remarkable stuff, an angry, agitated state-of-the-nation polemic that raises questions of identity.

“I’ve always been interested in politics, actually,” she says, “but for the first time I felt a real urgency to write about it. I can’t tell you why, exactly, except that the older I get, the more frustrated I become in seeing what is happening all around me.”

The album’s overriding theme is war, the abhorrence and futility of it. “Soldiers fell like lumps of meat / Blown and shot out beyond belief,” she sings in “The Words That Maketh Murder,” which draws vivid parallels between World War I’s 1915 battle at Gallipoli and current-day Iraq and Afghanistan.

“The way we treat one another as individuals and nations is incredibly distressing,” she says. “It prompts anger and despair in me, of course, but I’m still hopeful for the capacity to change. We have to be, don’t we?”

Following her maiden Coachella appearance this year, Harvey is sticking around for some shows in the U.S., but even in this she likes to keep things idiosyncratic. “I have done back-to-back nights across the whole country, but I don’t want to do that this time,” she says. “I like the idea of residencies, a few nights in a row in the same venue. It makes it all a little bit different, perhaps even special.”

Let England Shake is itself another curveball in a 20-year career full of them, Harvey consistently dismantling the style, sound, and image of each album after its conclusion in pursuit, next time around, of sometimes total reinvention.

“I’ve never had any interest in making something I’ve already made before only slightly differently,” she says. “But I do have a huge interest in gaining knowledge and experimenting, and then moving into new areas.”

It is this chameleonlike approach that has allowed her to switch from pagan folk to accessible rock so seamlessly, from 1992’s abrasive Dry to 1998’s ethereal Is This Desire? to 2000’s streamlined Stories From the City, Stories From the Sea, and now to the haunting but at times oddly jaunty Let England Shake.

And she has achieved all this with rare success too, winning awards and plaudits and longevity, as well as the respect of her idol, the late Captain Beefheart, who once called her to praise her work (something Beefheart almost never did to anyone). So impressed is London’s Imperial War Museum with her new album that it has invited her to become its first “War Artist.”

Her constant state of flux is mirrored in her private life as well. Born and once again living in the town of Dorset in southwest England, Harvey previously spent years roaming the planet in search of writerly inspiration: London, New York, and even Los Angeles for a while a few years back. (The latter move raised eyebrows at the time, as if this was somehow out of character.) And now, at 41, she seems to have found a kind of quiet contentment that might just endure. Though she won’t, of course, tolerate questions about her relationship status, she will say that she has an active social life in Dorset but also remains ultimately devoted to her work, “which I must carry out alone.” She writes every day and also paints.

“I get a lot of satisfaction out of painting,” she says. “But I don’t think I’m a great artist, so I wouldn’t want to do an exhibition just yet, with all guns blazing, saying, ‘Here is my wonderful artwork!’?” She laughs. “It’s funny. I wanted to become a painter originally. When I released Dry, I thought it would sell at best a few hundred copies, and then I’d return to my art, but I got lucky. Right now, it’s merely an extension of my writing. Perhaps one day I will show it, but I’ll wait until the time feels right.”

The fact that she is happy to remain, for the foreseeable future, a songwriter at all is progress of sorts, because once she wasn’t so sure.

“I did toy with the idea of becoming a vet instead, it’s true,” she says. “And a nurse. I’ve always been drawn to the idea of care, of helping people. But I realize now what a luxury it is to be doing what I do. I’m a creative individual and have always tried to make my work as well as I can, and make it meaningful and worthwhile. Ever since I first started doing this, all I have ever tried to do is follow my gut. I hope I always will.”