The rapper also opens up about his hit album Rolling Papers. 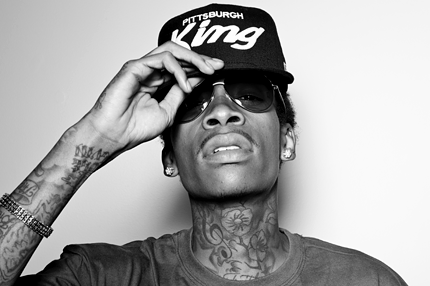 Wiz Khalifa is riding high – and not just because he’s been smoking for about nine years straight.

His major-label debut, Rolling Papers, sold 197,000 copies in its first week, finishing at No. 2, just behind Britney Spears. He’s in the homestretch of headlining the Campus Consciousness Tour (co-sponsored by SPIN), playing to sold-out crowds coast-to-coast, and he’s also filming a stoner-buddy film with none other than Head Puffer In Charge, Snoop Dogg.

It’s been a rocket to the top for Wiz, who grew up traveling the world as a military brat before settling in Pittsburgh and pursuing a rap career on the mixtape circuit. SPIN caught up with the lanky tat-covered MC on a rare day off to see how he’s adjusting to the high-profile life, what he does with all the weed people give him on tour, and his friendship with Snoop.

Way to go on your opening week. How did you feel about those numbers?I felt really good! I never really had any expectations anyway, so what it did was awesome.

How have the shows been on the Campus Consciousness Tour?
All of them are sold out. The kids are coming out and having a good time. I’m also doing new stuff, so it’s been pretty great.

Have you noticed your audience has changed on this tour?
My fan base has always been really interactive, as far as knowing the words to all the songs. It’s just that there’s more people now – and different types of people, younger people. When I was doing my shows before, you had to be a certain age to get in, or at least be around it. Now, there’s all these kids at the shows.

It’s amazing how quickly you’ve gone from a small but dedicated fan base to this mainstream success, competing with Britney Spears. Are you shocked?
Actually, not at all, just because it’s been a lot of work up until this point. All of the stuff that I’ve done that people haven’t been able to see, that’s what built my character into who I am now. So, this stuff, I’m just ready to knock it out.

Are people throwing you weed all the time as you travel around?
Absolutely.

Do you usually accept it?I don’t usually smoke the fan weed. I accept it as a gift and pass it on to somebody else.

Any collaborations coming up?
I’m excited to work with Pharrell, and I want to do some more stuff with Lex Luger. I want to just build and do crazy stuff that people that don’t even expect.

Have you gotten together with Pharrell yet?
We got together once at a studio in South Beach and we made two records that night, but it was like at the end of when I was doing my album, so I think if we get in now, it’ll be totally different.

What’s in store for your movie with Snoop?
The movie’s called High School. It’s a buddy film and we’re just playing on our relationship, giving people something fun to get high to. That’s the mission of the film.

Have you ever acted before?
I don’t have much acting experience, but I’m good at it. It comes naturally.

What tips has Snoop given to you?
He’s been doing this forever, so he just told me all the right things to do, be natural, be myself, and just come through with it and never hold back.

Do you and Snoop bond over weed?
Absolutely, but even more than weed, we talk about business. Snoop has a lot of game to give me and he doesn’t mind listening to my point of view because I’m young and I’ve got the game now. He’s had the game forever, but I know what’s poppin’ now, so he doesn’t mind asking my opinion and following my lead on stuff.

Do you ever get star-struck, collaborating with these dudes who you grew up listening to?Not really star-struck, it just makes me step up to the plate and be confident in who I am.