The Brooklyn art-rockers play a 41-minute set for Live on Letterman. 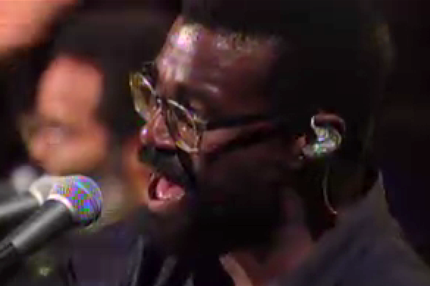 NBC’s Live on Letterman series has featured some of rock’s hottest artists in stretched-out web-only live performances, including Florence + the Machine, Gorillaz, and (earlier this week) Foo Fighters. Thursday night, Letterman hosted TV on the Radio, who performed a thrilling 41-minute, 8-song show, which you can watch here.

The Brooklyn art-rockers just released their stunning new album Nine Types of Light this week, but they kicked things off with the 2003 classic “Young Liars,” which features guitarists Kyp Malone and Dave Sitek unleashing ear-deafening torrents of noise. From there, they ripped into deep cuts like the Malone-fronted “Blues From Down Here” and electrifying fan favorites like “Wolf Like Me.”

WATCH: TV on the Radio, Live on Letterman

Kevin O'Donnell
Tags: the wire, TV on the Radio, Videos