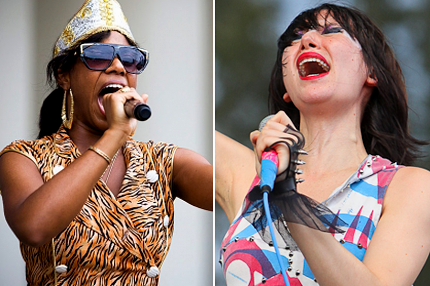 It’s been three years since Santigold released her stellar, genre-crushing debut album, but now she’s back with “Go,” a hot, skittery jam that features guest vocals from Yeah Yeah Yeahs’ Karen O and guitars from Nick Zinner. The track is available to stream on Life + Times, the lifestyle website recently launched by Jay-Z, whose Roc Nation management company signed Santi back in March.

Santigold was working in the studio with Q-Tip on “Go” when she was struck by an “audio-vision:” Karen O needed to be included on the track. Santi reached out, and after e-mailing back and forth, the two hammered out this wild piece of über-futuristic dance rock. Built on a bass-heavy beat and synths, the song morphs into a punky girl-group-esque freak out – as if the The Ramones joined forces with The Shangri-La’s. If “Go” is any indication, Santigold’s forthcoming album, out later this year, is totally gonna rule.