Hear rips of "The Butcher" and "Supercollider." 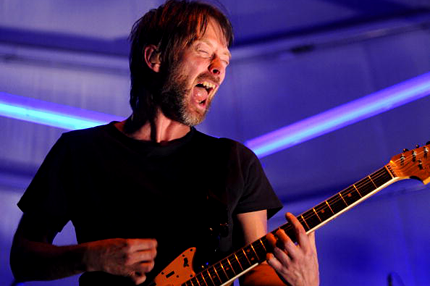 The hottest, most sought after release for Saturday’s Record Store Day is a limited-edition vinyl release from Radiohead, featuring two new songs titled “Supercollider” and “The Butcher.” The pressing will only be available in the U.K., but low-quality rips of the tunes have hit the web. Hear them here (via Prefix).

“The Butcher” is a rumbling, beat-focused jam that mixes the groove-oriented focus of Radiohead’s latest album King of Limbs with the clinical electronic vibe of Amnesiac. “Supercollider,” which the band has performed live, is far more epic: a slow-building, symphonic anthem that stretches on for almost seven minutes.

In related news, Radiohead have said they are not planning to release a companion follow-up to Limbs, after speculation hit the web that they have one in the bag. “There are [other] songs that we have started, that we never finished, but there’s not like seven or eight finished songs waiting in the wings to be released now, or in the autumn, or something,” guitarist Ed O’Brien told the BBC.

UPDATE: Radiohead will issue a 12-inch version of “Supercollider” / “The Butcher” in the U.S. and Canada on June 14.