Hear "Get Up," a heavy electro jam off the upcoming Korn EP. 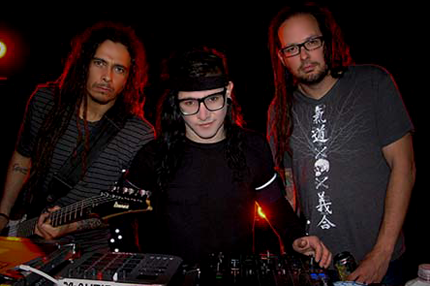 Hot Los Angeles DJ Skrillex’s set at this weekend’s Coachella Festival is sure to be a bangin’ dance party, and during his performance he’ll be playing his new collabo with Korn, “Get Up.” But you don’t need a ticket to the Indio, CA, event to hear the track — SPIN is premiering it here!

“Get Up,” tentatively due on a new Korn EP in May, is a skittering blitzkrieg of heavy electro beats and guitars. “I heard a few of Skrillex’s re-mixes and really felt there would be a good chance that he would have the right sensibility to connect us to a new hard sound and direction, but still keeping Korn guitars and our vibe,” frontman Jonathan Davis tells SPIN. “We were just thinking of trying something new, to be honest, so I had my manager reach out to the Skrillex camp. When we got into the studio the connection was instant!”

For complete Coachella coverage, check back to SPIN.com over the weekend!

LISTEN: Korn and Skrillex, “Get Up”