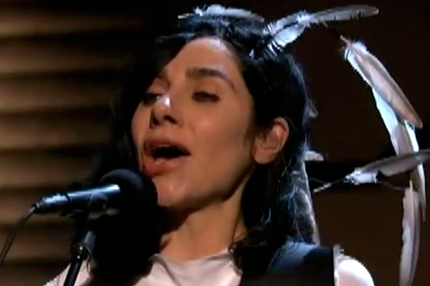 It’s rare that PJ Harvey makes television appearances in the States, but as she preps for her appearance at Coachella this weekend, the British singer-songwriter dropped by Conan O’Brien’s show to deliver an electrifying performance of her Let England Shake track “The Last Living Rose” last night.

Harvey, backed by a band that includes her chief collaborator John Parish, delivers a faithful rendition of the album version, but she ratchets things up by wearing a bizarre, eye-popping outfit: ghostly white gown and what looks like a dead bird wedged in her head.