The ex-Fall Out Boy frontman leaves this emo-pop past behind him with a genre-blending set at a tiny club. 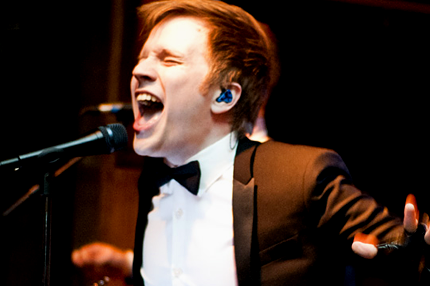 Patrick Stump’s new solo tour kicked off Sunday night the same way his early outings with Fall Out Boy did: at a small, sweaty Chicago club packed with screaming girls under the legal drinking age. But that’s where the similarities end. From zipping through sax-fueled numbers with Mos Def horn player Casey Benjamin to big-upping Prince on a keyboard-driven cover of “Nothing Compares 2 U,” the former emo-pop heartthrob (and Chi-town native) made one thing clear: This ain’t a Fall Out Boy concert, it’s a goddamn Patrick Stump show.

Clad in a black tuxedo and fingerless gloves, the newly svelte singer – and first-time solo artist since FOB went on hiatus in 2009 – dedicated his one-hour show mostly to tunes from his new EP, Truant Wave. (His debut full-length, Soul Punk, is due this summer.) Backed by a four-piece band (including a bassist whose ink-black hair and gleaming white teeth strangely resembled his former FOB sideman Pete Wentz’s), Stump let his musical influences – Eighties R&B, free jazz, soulful pop – shine. He cribbed Michael Jackson’s fierce wail and Prince’s falsetto on the meandering slow jam “Cute Girls” (sample lyric: “Girl, I’m just impressed with your face, not your breasts”); on the dark anthem “Big Hype,” he bemoaned the dangers of buzz (“never, never, never trust” it) over sparse tribal drums.

The sold-out crowd at the 167-capacity Schuba’s Tavern dug Stump’s style shift; fans were dancing enough to inspire hair-curling temperatures inside the tiny club, and there were zero requests for FOB tunes. Still, midway through his set, Stump wanted to confirm that no one regretted trekking out on a Sunday night: “I don’t know if you’re digging this,” he said. “I’m at the point where I don’t mind one way or another, because I’m having a blast.”

Aside from pumping up the audience with positive tunes – “Spotlight (Oh Nostalgia)” features affirmations like, “You could be your own spotlight / You could be the star” – Stump kept the energy high with cool frontman tricks. On the funk-rock rave-up “Cryptozoology,” he spit rapid-fire lyrics almost as fast as the Micro Machine man; on the hyperkinetic, synth-spiked “Porcelain,” he busted out a Rick James-style imitation before pounding a set of drums.

Some of the songs felt a little loose (at times, it was hard to discern a clear beginning, middle, and end), and Stump did blank on the lyrics during his rendition of “Nothing Compares 2 U,” but he was sanguine about the hiccups. “It’s my first show,” he said with a smile.

His Midwestern nice-guy-ness was endearing, especially when he shouted out to his dad and sister, who were in the audience. He even sang a couple lines of “Happy Birthday” to Papa Stump, whose birthday was on Saturday. “I’m proud to be home,” he said. “It’s been a crazy year and I’m grateful you guys showed up.”

The show wrapped with a pop-punk-meets-hip-hop medley that included Gym Class Heroes’ “Cupid’s Chokehold” and Kanye’s “All of the Lights.” Stump even rapped a few lines – a welcome reminder that the guy who fronted Fall Out Boy for nearly a decade has some new tricks up his sleeve.