The singer-guitarist on Prince, The Twilight Zone, and Waffle House. 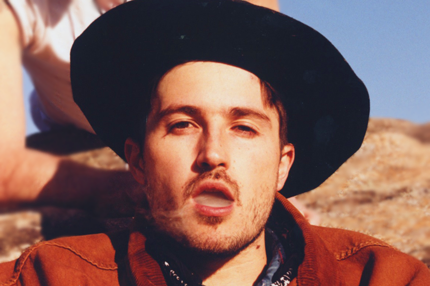 FAVORITE SONG:
“‘The Last Mile of the Way’ by Rev. Julius Cheeks. It’s a soulful Christian song about death from the late-1950s. It makes most punk bands look tame.”

FAVORITE ALBUM:
“Purple Rain by Prince. My mom took me to the movie when I was a baby and breast-fed me in the theater. Years later I rediscovered the album when this guy Popeye, a prisoner on a work release program that I washed dishes with, brought the tape to work. I got real emotional and almost cried over the plates. He asked why I was so sad. It must have been Freudian.”

FAVORITE NEW ARTIST:
“White Fence [the project of garage rocker Tim Presley] from Los Angeles. His sound incorporates cassettes and loops, which I am both fond of. It sounds like Ariel Pink produced by 13th Floor Elevators.”

FAVORITE TV SHOW:
“The Twilight Zone. The old black and white episodes are my favorite. The intro is so surreal. And I only watch it at night, which is way better. I pick them up along with Hee-Haw at the Cracker Barrel on tour.”

FAVORITE RECORD STORE:
“Ernest Tubb in Nashville, although they don’t have vinyl or cassettes, which is normally a must. They have so much history and weird rare country music that is always inspiring. [Pedal steel player] Pete Drake was the best record I bought there recently.”

FAVORITE PIECE OF MUSICAL GEAR:
“My Squier Bullet. It was my first guitar. An old dobro picker named Pete Benbow gave it to me. So many fluids of different origins have graced this Japanese-crafted masterpiece.”

FAVORITE WEBSITE:
“Disinformation.com. That’s where I get all my alternative information about occultism.”

FAVORITE RESTAURANT:
“Waffle House. I love rolling in at 3 A.M., smoking cigarettes and playing Elvis Presley b-sides on the jukebox. Free refills on Coca-Cola and waitresses with names like Jo and Mookie!”

FAVORITE DRUG:
“I prefer ones with dissociative highs like Robitussin, Special K [Ketamine], and Ambien. They make you feel like you’re in a dream. I do not recommend taking these drugs often. And don’t drink on them.”

FAVORITE VIDEO GAME:
“Mortal Kombat. I remember the older teenage kids reeking of dope, ripping each other’s hearts in this alternate dimension. It was the first time I could semi-realistically live out the violence that lives inside our culture and in mankind itself.”

FAVORITE PIECE OF CLOTHING:
“WWII bomber jacket. I went to a garage sale and these folks said, ‘Grandpa fought in this jacket.’ It has a patch of Mickey Mouse parachuting. I got beat up by some skinheads in 2001 and then wore it with my black eye. I felt really tough.”