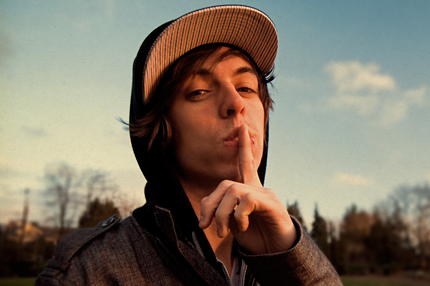 Grieves, an up-and-coming Seattle MC, has been impressing sold-out crowds as an opener for Minneapolis indie hip-hop mainstays Atmosphere on their current tour, and, from the sound of this killer track, the introspective apple doesn’t fall far from the tree. Grieves will release his new album, Together/Apart, on June 21– it’s his first first on Atmosphere frontman Slug’s Rhymesayers label. Hear the heartfelt song “Bloody Poetry” here.

Part inspirational pep talk, part therapy session, and part crooning song of devotion, the track shows off Grieves’ lyrical dexterity and a bleeding heart. “This is what it’s like to bleed ink / Put your fingers in it and paint me a picture of what you think,” he raps in the first verse.

Grieves will continue to tour with Atmosphere throughout May, opening alongside label-mates Blueprint, SAB the Artist, and DJ Abilities. After a short break, Grieves and Budo will hit the road again, joining this summer’s Vans Warped Tour.