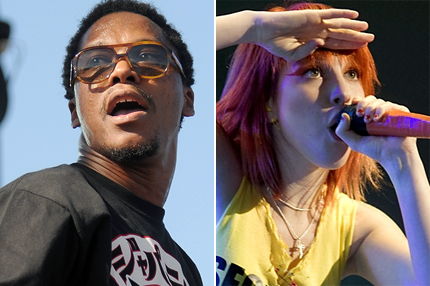 While B.o.B turned “Airplanes” into a smash hit, Lupe Fiasco had originally cut his own track using the now-ubiquitous hook by Paramore’s Hayley Williams — it has just leaked online and you can hear it now (via Some Kind of Awesome).

Lupe’s demo, which was intended for his album Lasers,doesn’t differ too radically from Bobby Ray’s version: Williams’ vocal contributions are exactly the same, and the symphonic, piano-powered instrumentation is intact. Still, it’s interesting to hear the lyrical differences: Lupe tells a story of two lovers who are surviving an apocalyptic nightmare, while B.o.B uses the track as a springboard for rapping about his sudden rise to success.

This isn’t the first time Fiasco, who butted heads over the release of Lasers with his label Atlantic, has recorded demos that were later used by fellow artists on his label. The rapper originally cut a version of “Nothin’ on You,” later turned into a smash hit by B.o.B and Bruno Mars.