Team of writers and photographers will document the most fun a fan can have at the California fest. 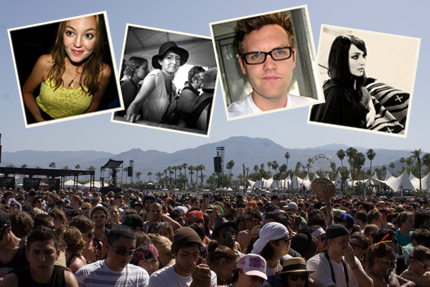 At Coachella 2011, April 15-17 in Indio, California, over 120 bands will take play over three days and five stages — it’s one of America’s biggest festivals, and SPIN has you covered, with loads of show reviews and live photography.

But this year, as part of a partnership with Hyundai, we’ll be showing off another side of the Coachella experience, as seen from the crowd, in the VIP section, and around the festival grounds. It’s the fan perspective, and we’ve got four amazing young creators set to document it all.

Check out SPIN.com starting at noon PST on Saturday, April 16, as our team begins to roll out their 40 Best Fan Memories from Coachella 2011. Here, meet our team — and be sure to say hi at the festival.

Going to Coachella? Stop by the Hyundai tent near the campgrounds to give your own video testimonial, telling us your own festival memories! You might make it into our mini-documentary on the fest!