The punk rockers are teaming up with the actor on a big screen adaptation of their musical. 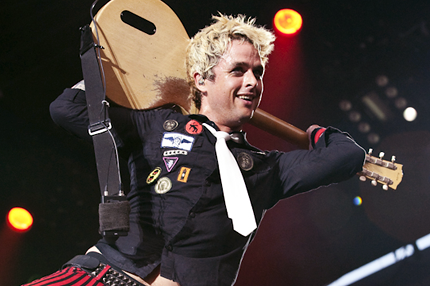 With Green Day’s American Idiot musical set to close on Broadway on April 24, the punk trio will begin working on a movie adaptation of the 2004 concept album, and they have tapped a Hollywood A-lister to produce it: Tom Hanks.

According to Reuters, the actor will work with director Michael Mayer (Spring Awakening) on the adaptation, which will be co-produced by members of Green Day. Universal studios is in negotiations put out the movie, which doesn’t have a production schedule or release date, and Dustin Lance Black, who won an Oscar for writing Milk, is the frontrunner to pen the screenplay.

News about Hanks’ involvement first leaked out in January, when it was rumored that Hanks’ Playtone production company was interested in working on the American Idiot adaptation. Frontman Billie Joe Armstrong also revealed that he would most likely play the role of St. Jimmy. “I think that’s a no-brainer,” he said.

Hanks’ involvement in a rock movie makes sense. He was a producer of Neil Young’s 2006 doc Heart of Gold and he executive produced the televised version of the 25th Anniversary Rock and Roll Hall of Fame Concert in 2009 and the smash movie Mamma Mia! in 2008. He also directed the 1996 rock-based drama That Thing You Do!.