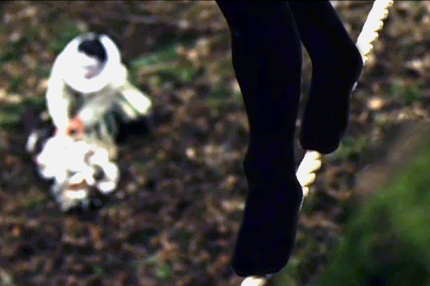 Rhode Island folk rockers the Low Anthem have an old-timey roots sound, and in the video for “Boeing 737,” a ballad from their new album Smart Flesh, the band go 1800s retro as members of an oddball circus, who battle a group of high-wire walkers. It’s totally weird yet totally poignant.

In the clip — directed by End of the Road Films, the group behind Low Anthem’s stop-motion “Charlie Darwin” video — a group of high-wire walkers dressed as birds carefully cross ropes strung between trees in a forest. As the snow delicately falls, axe-wielding circus entertainers wage war, hacking away at the trunks of the trees below until… TIMBER!

“The guys from End of the Road Pictures are friends of ours,” multi-instrumentalist Jeff Prystowsky tells SPIN. “One day they asked us if they could do a music video for ‘Boeing 737.’ They had this idea of filming actual circus tightrope walkers in the forest. It sounded like a great idea to us. And I think they nailed it.” Agreed!

The song’s lyrics reference Philippe Petit’s famed 1974 World Trade Center high-wire walk — “I bought Philippe Petit a round / And asked what his high wire was for”– and the video also features renowned circus performers Jade Kindar-Martin and his wife Karine Kindar-Martin as the feathered acrobats.