Download a brand new song from the earnest troubadour. 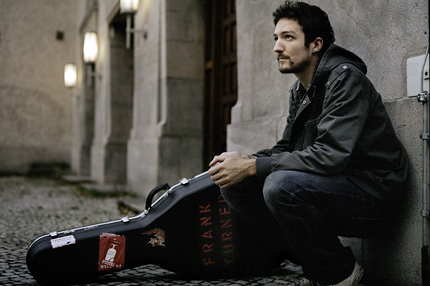 English singer-songwriter Frank Turner is one of SPIN’s picks for this weekend’s Bamboozle fest in New Jersey, thanks to the “witty, earnest-as-hell” songs on his new album, England Keep My Bones (out June 7), including “Peggy Sang the Blues,” stream-able here.

The “Peggy” in the song is Turner’s grandmother, who helped him develop a positive, individualistic attitude, including the mantra in the song’s chorus: “It doesn’t matter where you come from,” Peggy whispers to Frank in a dream. “It matters where you go.”

“One of the things I don’t like about English culture is our obsession with people’s backgrounds,” Turner tells SPIN. “I believe life is what you make of it as an individual.”

The song also helps Turner remember Peggy fondly. “She was totally awesome,” he gushes. “She got me drinking whisky and playing poker at age 10. She passed away a long time back but I think of her often.”

Turner explores his feelings of home quite often on England Keep My Bones. “I like music that has a sense of place to it, and I’m English through and through myself,” he explains. “I always loved how Springsteen writes about New Jersey and I wanted to do the same for myself.”

Download “Peggy Sang the Blues” here. You can also grab another Frank Turner jam — the epic “I Am Disappeared” — on SPIN’s Bamboozle mixtape.