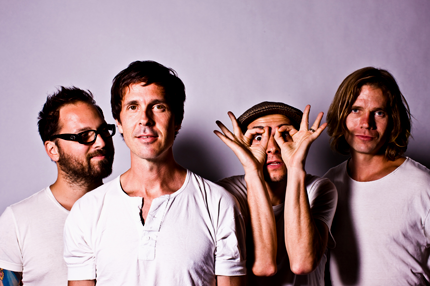 While he’s gearing up for the release of his own band’s long-awaited new album, Adam “Ad-Rock” Horovitz of the Beastie Boys offered his studio wizardry to Rival Schools, the post-hardcore quartet whose roots also run deep into 1980s NYC. Hear Ad-Rock’s remix of Rival Schools’ “69 Guns” here.

The original track, off Rival Schools’ recently-released album Pedals, their first in a decade, has a trailblazing, jangly guitar riff and a hint of acoustic strumming, but Ad-Rock’s take stretches frontman Walter Schreifels’ vocals across an SUV-bumping beat that could be culled from a recent Radiohead album.

Rival Schools drummer Sam Siegler shoots hoops with Ad-Rock, and that’s where the idea originated, says Schreifels, noting that his band gave zero guidance before turning over their song: “He’s tha King Ad-Rock,” he tells SPIN. “What instructions could we give him that he wouldn’t have already considered before us? We knew he would nail it.”

“I went by his studio, we listened together, he asked if I wanted to tweak anything and I said, ‘No,'” Siegler adds. “I was looking for a different interpretation of the song and we got it. All he had was a vocal a cappella and the tempo, so he basically wrote a new song. [We’re] very thankful — it’s definitely new ground for us, but it was a fun experiment.”

Rival Schools kick off a short West Coast tour May 20 in Anaheim, CA — get full dates via their Facebook page.