Do the ‘Robot’ With Brit Dance Rockers the Wombats

Download "A Robot Like You," a B-side from the trio's upcoming second album, plus stream their lead single. 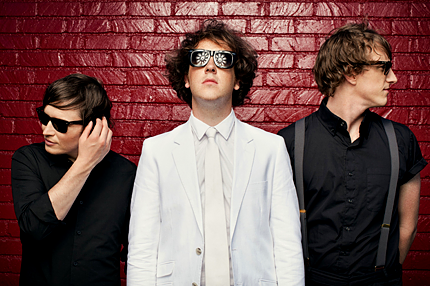 No, it’s not the next Twilight movie — it’s two new tracks from British dance rockers the Wombats. The trio will release their second album, The Wombats Proudly Present… This Modern Glitch, on April 26. Get an exclusive download of their brooding B-side, “A Robot Like You,” plus hear the lead single “Tokyo (Vampires & Wolves).”

While the synth-heavy “Tokyo” is a giddy pop rush to the dance floor (and already a Top 40 single in the U.K.), the darker B-side “A Robot Like You” strikes a forlorn tone, with an Echo & the Bunnymen for the Internet Age vibe. Over a jagged post-punk riff, lead Wombat Matthew Murphy does his best sad robot impression: “There’s a procedure to self-implode / But too many glitches run throughout the code.”

“Its about feeling quite lost and empty,” Murphy tells SPIN. “Perhaps its about structure and the idea that everything is mapped out for us from the word go.” Sad stuff, sure, but it’s determinism you can dance to!

The group will play select dates in New York, L.A., and San Francisco in late May and early June, but they have plans for a large tour of the States in October and November. So practice your robot dance now.

Watch the Wombats Perform “Give Me a Try” at Firefly 2016