More than 20 years into their career, the Sacramento rockers showcase their musical range and maturity. 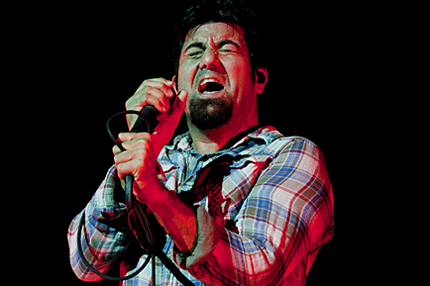 “I’ve never seen the Deftones playing better than they are right now,” proclaimed Dillinger Escape Plan vocalist Greg Puciato near the end of his group’s opening set at the kickoff of the two bands’ joint U.S. Tour at the Paramount Theater in Seattle Thursday night. Puciato was not simply pandering to the audience — Deftones have aged particularly well, especially compared to the majority of bands they shared the stage with over the course of their 20-plus year career. Relentless touring has only sharpened their skills as performers, and if the three large, ornate rugs laid out in front of their amps were any indication, the Deftones consider the stage a kind of home.

Deftones opened their set with the title track from their newest record, Diamond Eyes, spotlighting the down-tuned, chugging riffs of guitarist Stephen Carpenter. And from the first song it was clear singer Chino Moreno’s vocals were fresh and operating at peak performance. The band followed with “Rocket Skates,” Moreno shrieking the chorus, “Guns! Razors! Knives!” in a murderous caterwaul.

Backtracking to their first album Adrenaline, Deftones began methodically moving through the choicest cuts from each of their releases, save for Saturday Night Wrist, which was ignored completely.

There is an undeniable swagger in the simplicity of Adrenaline tracks “Birthmark” and “Engine No. 9,” thanks in no small part to the understated yet impeccable drumming of Abe Cunningham, who provided an impenetrable foundation. Sergio Vega, filling in on bass since Chi Cheng was seriously injured in a car accident in 2008, admirably handled bass duties and backup vocals, keeping the rhythm section locked tight. And Moreno’s inimitable hip-hop vocal styling on “Engine No. 9″ and “Back to School” has thankfully avoided putrefying over time like so many rap-rock relics of the last two decades, though the fact that Moreno generally kept that aspect of his singing to a minimum probably played to his advantage.

By now, it should be clear to anyone paying attention that Deftones were never really a Nu-Metal band, no matter how often they got lumped in with that crowd of derelicts. Though their early tracks were brutish and blunt, the band ceaselessly expanded their style and range with each new release, combining eerily beautiful soundscapes and heavy riffage in to create a sound all their own.

This transition was obvious as the band moved from tracks “My Own Summer (Shove It)” and “Around the Fur” to the hauntingly ethereal “Digital Bath” and the creepy, ominous build of “Knife Party,” which was flawlessly complemented by scenes of floating limbs and pianos eating teenage girls from the classic Japanese psychedelic film “Hausu.”

The video selection for the slow-burning anthem “Minerva” was spot-on as well, with the crowd triumphantly chanting along the chorus, “So God bless you all, for the song you sang us,” as flaming piles of space shuttle debris gloriously rained from the heavens in slow motion.

The highlight of the set was “Sextape,” a track off Diamond Eyes that marks the most hopeful and elegant song Deftones have written to date. Once again the imagery was sublime, with the reverb- and delay-soaked chords chillingly accompanied by a montage of girls swimming underwater, engulfed in an infinite spectrum of light and color. Together, the song and video captured the essence of a “perfect moment,” a transient bliss you desperately wish could last forever yet fades away before it can be grasped.

This dichotomy of heavy and beautiful is what has kept Deftones relevant. It may have alienated a chunk of their thickheaded, “If it’s not heavy we hate it” fan base along the way, but the band has successfully proven throughout the years that they are much more than a passing fad of mainstream rock.

In the early 2000’s, when Deftones hit their peak in popularity with White Pony, the Dillinger Escape Plan was one of the most exciting new bands in the tech metal/hardcore scene, showcasing some of the most insane raw talent of anyone brandishing a guitar or pummeling a drum set. In the last ten years, as Deftones have moved farther away from the center, Dillinger has slowly crawled toward it. Incorporating Reznor and Patton-esque vocals and expanding their songwriting with dark grooves and brooding melodies, the band has abandoned the sheer, inexorable mayhem of their early records for a slightly more mainstream approach.

Though they may have tamed it down a bit, the Dillinger Escape Plan are still an explosive, frenetic band, with undeniable chops and a penchant for showboating. Guitarist Ben Weinman — the only original member of the band remaining — mounted an illuminated riser to take solos, recklessly spinning his guitar around in his arms, and ripping a 4×12 cabinet to the ground to shred on its back.