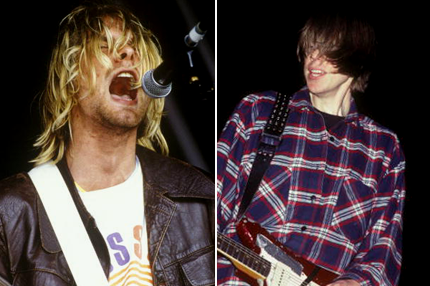 For Dave Markey’s classic documentary 1991: The Year Punk Broke, the indie filmmaker trailed Nirvana, Sonic Youth, Dinosaur Jr., Babes in Toyland, the Ramones, Mudhoney, and other classic alternative acts along a European tour just before the explosion of “Smells Like Teen Spirit” and grunge mania. The movie has been out of print for years, shown sporadically at festivals like All Tomorrow’s Parties in 2008, but it will finally get the deluxe DVD treatment on a reissue slated for release this fall (via The Amplifier). You can watch it below.

Markey’s movie offers an unfettered look at Nirvana and Sonic Youth as they toured the European festival circuit in the summer of ’91, and he captures plenty of backstage high-jinx (like Nirvana’s Kurt Cobain destroying a dressing room with an exploding bottle of champagne) and live performances with gritty, lo-fi cameras.

The DVD release is packed with 42-minutes of never-before-seen footage: live performances by Nirvana of “In Bloom” and Sonic Youth of “White Kross” and “Orange Rolls/Angel’s Spit.” There’s also audio commentary by Thurston Moore and Markey, rough edits of performance material, and video from a 2003 panel about the film (featuring Moore, Markey, Ranaldo, and Dinosaur Jr.’s J Mascis discussing the movie’s legacy).

Head over to the movie’s site to check out previews of previously unseen material, including footage of Cobain performing in the pit, and a backstage interview with Moore and Kim Gordon. Plus, watch the movie in its entirety below (it’s set to be taken down from Google on April 29).