It's got a '90s film score vibe. Hear the awesome debut track, "Glitch." 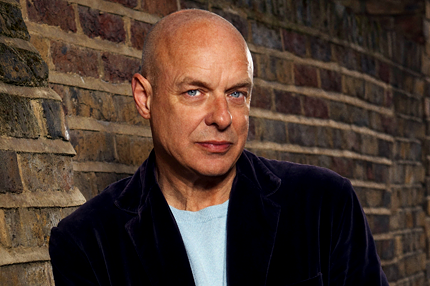 Brian Eno will release a new album, Drums Between the Bells, on July 5, a collaboration between the iconic producer/experimental musician and a friend, British poet Rick Holland. Hear the stunning first song, “Glitch,” now.

On the track, the duo enlisted a Polish man called Grazyna Goworek to read Holland’s lyrics, and his thick accent, when touched by Eno’s usual studio wizardry, sounds like HAL from 2001, if he were programmed in the Eastern Bloc.

Underneath the spoken word performance, the track builds from a minimal array of acoustic drums and soothing keyboard swells. At the 1:27 mark, the whole soundscape inverts, like it’s being sucked into a vacuum. Goworek’s voice turns more metallic, and a staccato barrage of digital pulses takes over. Think the jazz-hop film scores of David Holmes (Out of Sight, Ocean’s Eleven) married with the electronic edge of Underworld.

Eno and Holland first collaborated in the ’90s, then again in 2003, but neither of those efforts resulted in any recorded material that was released to the public. This new album was recorded earlier this year, and it’ll be released as a CD, digital download, 12″ double vinyl, and a hardback 2-CD edition with a 44-page book and instrumental versions of all 15 tracks.