The Montreal collective show why they are one of rock's great live acts. 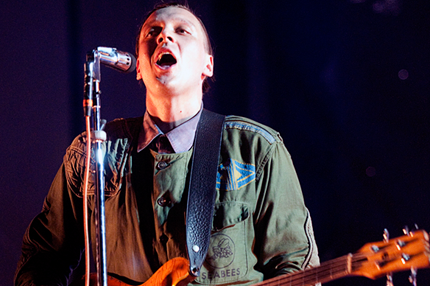 It was a sight to behold: Hundreds of giant flashing blue, purple, pink, red, and green balls dropping from a crane on top of the Coachella mainstage as Arcade Fire worked through “Wake Up,” their final song of Saturday night’s headlining set. Singer Régine Chassagne was spinning, twirling a rainbow of streamers, and all around the festival grounds lights were blinking in unison, from the faraway fences to the oft-photographed ferris wheel, transforming the scene into a bubbling Lite Brite.

But the set had been impressive from the initial bass notes of opener “Month of May” and the giddy na-na-na chorus of “Rebellion Lies.” “If you told me in 2002 that I’d be headlining Coachella with Animal Collectiveopening, I’d say you’re full of shit,” frontman Win Butler said at the start. “Thank you so much. We don’t take thisfor granted, not even for a second.”

This night Arcade Fire showed their range, from the piano folk of “The Suburbs” tothe acoustic atmospherics of “Rococo” to the goth surge of “Intervention,” during whichthe stage was softly illuminated with candle lights and a church organ was ondisplay on the LED screens behind them.

Throughout the 18-song, 100-minute set, thetwo violinists — Marika Anthony Shaw and Sarah Neufeld — pulled long strokes of liltingmelodies and shouted along, as guitarist Richard Reed Perry added texture and Butler’s brother, William, ran around the stage banging a drum to stoke to crowd.

On the sexy-tropical jam “Haiti,” Chassagne waltzed and twirled in her gold-sequineddress. The song holds special meaning for the band: Chassagne isof Haitian ancestry, and Arcade Fire have been raising money for the broken nationsince the earthquake of January 2010. Butler urged the crowd to donate money to thecause. “It’ll be like a birthday present,” he said, explaining that he had just turned 31.

Coachella came to party, though, and Arcade Fire knew it. “That was the peacefuland thoughtful portion of the show,” Butler said, “now let’s do something!”

And with that the nine-piece band kicked into the frantic “Neighborhood #3″ then “Keep the CarRunnin’,” reminding some 60,000 festivalgoers why the recent Grammy winners have become one of rock’s most amazing live acts.

Setlist:
Month of May
Rebellion (Lies)
No Cars Go
Haïti?
City With No Children
The Suburbs
The Suburbs (Continued)
Crown of Love
Rococo
Intervention
Neighborhood #2 (Laika)
We Used to Wait
Neighborhood #3 (Power Out)
Keep the Car Running
Wake Up ?