The anthemic Cali rockers share the story behind the band's name. 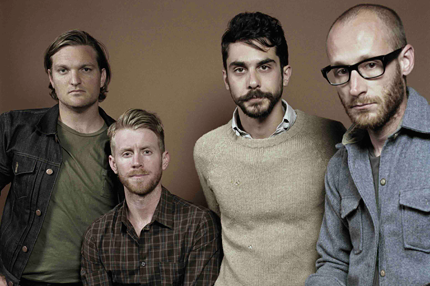 This week’s edition of Name That Band: California rockers Cold War Kids, who are currently touring behind the sleekly powerful new Mine Is Yours. The group headlines New York City’s hallowed Radio City Music Hall on March 24.(See past episodes of Name That Band! here.)

Why Cold War Kids: “I had the name six or seven years before the band started — so probably since 1997,” says bassist Matt Maust. “I was traveling in Eastern Europe with my brother. There’s this big park in Budapest where they dumped all these statues that had been removed after Communism fell. Now it’s just a place where people can go and have picnics. There’s a playground there. So being in that environment just made the phrase ‘Cold War Kids’ pop into my head. I may have heard it before. I’m a cold war kid, too — I was born in 1979. Originally, I used the name for a website I had where I posted art and poems. Then when I started playing music with the guys, they thought it would be a good name for the band, too.”

Previously Rejected Names: “The Reds. We liked that,” says singer-guitarist Nathan Willett. “It was pretty immediate. We also liked the name the Nudes for a while.”

Best Band Names Ever: “I like Fugazi a lot,” says Willett. “The Gorillaz. New Order. Spiritualized. But the Clash is the best one ever.”

Worst Band Names Ever: Says Willet: “I grew up in an era of bad band names. Some of the stuff that was on MTV when I was 14 was pretty rough: Collective Soul, Blues Traveler, Marcy Playground. It wasn’t a great time for band names.”