Plus: Dave Grohl and Co. announce one-night-only screening event for career-spanning documentary Back and Forth. 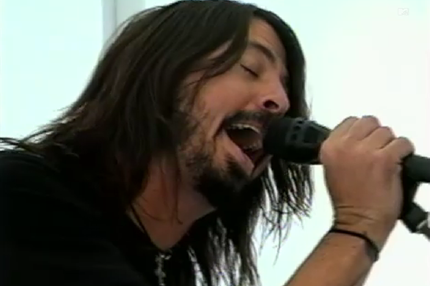 When the Foo Fighters’ filmed the video for new track “White Limo,” Dave Grohl said the clip was inspired by old-school, lo-fi VHS performances of his favorite bands like Black Flag. The Foos just dropped a video for the lead single “Rope,” from their forthcoming album Wasting Light (April 12), and the group takes a similar approach with a refreshingly DIY, performance-based clip.

“Rope” finds Grohl and his band rocking out in an immaculately lit cube, which eventually morphs into something resembling a Technicolor disco. Grohl, who has directed past videos like “My Hero” and “Monkey Wrench,” recently told MTV the clip was shot entirely on VHS tape to give it a grainy look.

In related news, the Foo Fighters have announceda one-night-only screening of their documentary Foo Fighters: Back and Forth on April 5. The movie – which chronicles the band’s beginnings up through the making of their new album – will screen in 80 theaters across the country and will be followed by a broadcast of a live set. It will also air on April 8 at 10 p.m. ET on VH1.