L.A.'s Kaplan sisters infatuate with a retro sound that might lead to a big future. 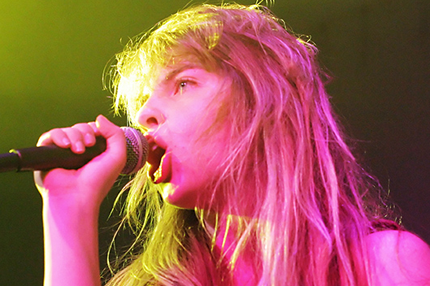 As the Isley Brothers’ cinematic wet kiss “Between the Sheets” faded down (at the buzzkillingly named Klub Krucial), Los Angeles indie-pop troupe Puro Instinct launched into their own hypnotic brand of bratty pillow talk. The band is led, and almost entirely defined, by the unavoidably blond swagger and Pretty Poison preociousness of the Kaplan sisters, Piper and Skylar. You can almost imagine Tuesday Weld as their chainsmoking stage mom, rasping that she’s gonna “cut the best deal possible for my babies.” And the “babies” rolling their eyes and wailing in unison, “Maaahhhm, staaahhhhp!”

Of-age frontwoman Piper affects a sleepily self-aware posture that’s part Scarlett Johansson in Ghost World, part Courtney Love circa “Retard Girl” and part Nico when she first networked with Brian Jones, while underage guitarist Skylar is, at least by comparison, more of a bright-eyed tomboy, yet with even more stunning Hollywood cheekbones. There are four other musicians in the band — female keyboardist, male guitarist, bassist, and drummer — who all competently enable the Kaplans’ daydreamy drone and tangle of minor-key ’80s/’90s alt-rock, which occasionally ascends into a soft-focus chorus that sounds exactly like an old 120 Minutes clip playing in the background while you check your email that you think is the Cure but isn’t.

Their better songs — the fabulously impressionistic “Stilyagi,” “Can’t Take You Anywhere,” “Silky Eyes” — suggest a future that could transcend Piper’s almost obnoxiously flat, heavily reverbed vocals, which are probably not gonna improve any time soon…. Okay, let’s be honest, they’re never gonna improve as long as she looks like that and rocks a bejewled black mini-dress with errant straps.

Their debut full-length Headbangers in Ecstasy sets an escapist mood that’s fairly remarkable, but is also contingent on listeners’ low expectations and first blush of infatuation. I can’t decide whether it’d be better for them to record an entire album with Ariel Pink playing Kim Fowley or Dave Fridmann redecorating their aesthetic with his psych-pop frippery. Maybe a remake of Foxes directed by Catherine Hardwicke would be better for all concerned?

So many questions and so many high-end hair products to juggle. The mind reels.