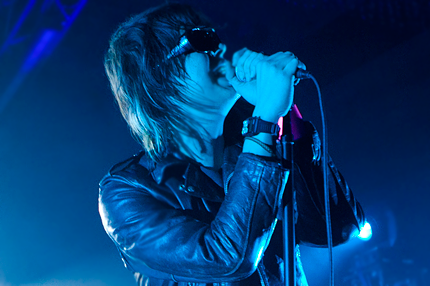 Julian Casablancas kept his cool — he always has, as if his DNA comes spiked with Freon — but the packed house before him teetered on the verge of hysteria Saturday night at the sparkling new Chelsea Ballroom in Las Vegas’ Cosmopolitan resort. “The wait is over,” the Strokes’ frontman announced in song, looking like midnight personified in black shades and a matching leather jacket.

It was a night of firsts — the Strokes’ first concert of the year, and their first supporting next week’s release of Angles, their first album in half a decade — and they were greeted with the kind of boozy fanfare normally exhibited by tipsy tailgaters in stadium parking lots.Dudes doffed their shirts and bear hugged strangers, high fiving in the stands and even attempting to get “The Wave” going at one point.

This was all for a band that’s pretty much a study in nonchalance, the inverse of all this bluster. At the Chelsea, they ambled about the stage like a bunch of factory hands coming back from a smoke break, in no particular hurry to get where they were going. When statue-stoic bassist Nikolai Fraiture, whose features look like they were etched from granite, did a mini-windmill ala a heavily sedated Pete Townsend during a seismic take on “Someday,” off their 2001 debut, Is This It?, it was about as demonstrative as this bunch got.

But despite their laidback presence, the Strokes ratcheted up the fervor through their music, which hit as hard as the crowd hit the bar. On “Reptilia,” a serious air guitar catalyst where six-stringers Albert Hammond Jr. and Nick Valensi went at one another with the wild, over-the-top bravado of a couple of drunks duking it out in a barroom brawl. It was played with bruising force early on in the band’s 75-minute, 18-song set at the swanky, chandelier-appointed, 4,000 capacity venue.

Later, the band fired off “New York City Cops” with Casablancas howling through the song like a dog with an anvil crushing its tail, while the tiered seating in the back of the hall seriously felt like it might collapse from all foot stomping during “Is This It.”

This same kind of manic energy powered some of the Strokes’ material from Angles, particularly “You’re So Right,” whose urgent guitars and abrupt ending came on like a heart palpitation. Less concussive, but similarly immediate, “Under Cover Of Darkness” registered as a funky shuffle with a Day-Glo bright chorus, while the slightly more ruminative “Life Is Simple Under the Moonlight” simmered at a slow boil.

The band also debuted “Taken for a Fool,” powered by ringing guitar lines and a whiplash beat, and the buoyant, soulful “Gratisfaction.”

On their records, the Strokes’ repertoire can come across as lithe and sinewy, a study in poise in precision. But live, their tunes often become much more muscular and bullying, as even old standards like “Last Nite” and “The Modern Age” took on a fresh vigor at the Chelsea.

“I can be mean,” Casablancas drawled during a concussive “Hard to Explain,” leaning into his mic stand so hard, it seemed as if he was trying to snap it in half. Welcome back to the new, tough-as-nails Strokes.

Setlist:
I Can’t Win
Reptilia
Under Cover of Darkness
The Modern Age
Whatever Happened?
Under Control
New York City Cops
You’re So Right
Is This It
Someday
Taken for a Fool
Hard to Explain
Life is Simple in the Moonlight
Take it Or Leave it
Gratisfaction
Automatic Stop
You Only Live Once
Last Nite

Jason Bracelin
Tags: Bonnaroo 2011, the strokes, We Were There