Bon Iver's Justin Vernon and Ryan Olson talk about their multi-membered project. Plus, check out concert footage from Austin! 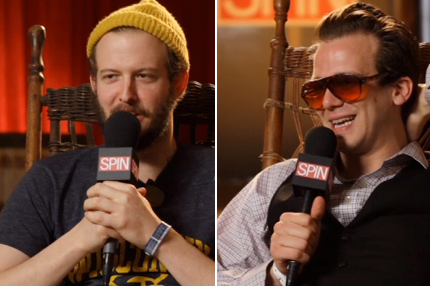 Not only is Gayngs a supergroup, but it’s super-sized. Featuring members of Bon Iver, the Rosebuds, Solid Gold, Megafaun, Digitata, the Doomtree family, and loads more, the 20-plus-member band is in the midst of its final stretch of shows supporting last year’s sexy, downtempo album, Relayted. Founder Ryan Olson and band member Justin Vernon, better known as the man behind Bon Iver, stopped by the SPIN Shed in Austin to talk about the project.

“I remember Ryan and I were driving around Minneapolis, doing something bad I’m sure, and he played me a couple of things,” said Vernon. “I was immediately like, ‘I’m gonna do something Bone Thugs [n’ Harmony] on that!'”

Vernon also talked about how the next Bon Iver album has been influenced by his Gayngs experience, as he says he’s doubled his roster of band members.

Watch more of the interview below, and check out some footage of the band’s SXSW showcase too!