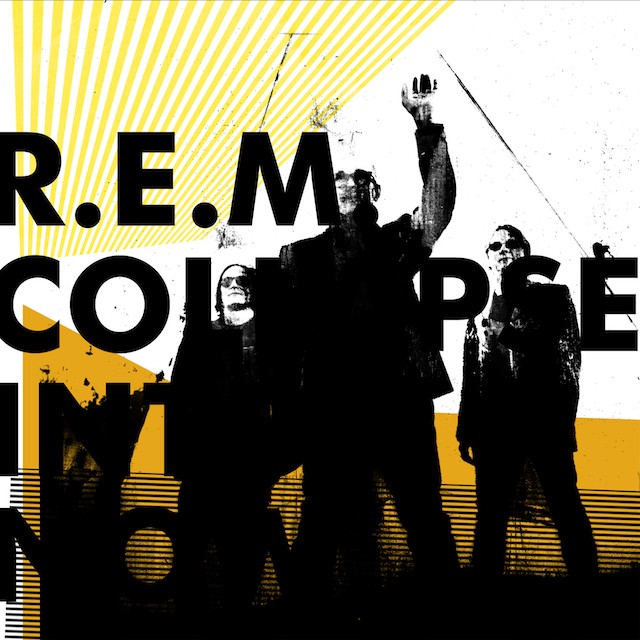 The definitely-call-it-a-comeback Accelerate was the sound of R.E.M. gloriously shaking themselves awake from a mid-life slumber. The equally enticing Collapse Into Now — album number 15! — taps the brakes and sets the cruise control, unafraid to check the rear-view for trusty old tricks. It sounds every molecule like R.E.M., which thankfully means no alarms and no detours. The desire to be more adventurous got us a 2005 duet with Q-Tip, and that ended badly.

Here, instead, they discover the glow of middle age, warmly acknowledging the past — hello again, Peter Buck’s mandolin — while realizing that the present can feel just as comforting. The sober, pretty “Uberlin” sounds like a happier cousin to “Drive.” Twinkling ballad “Every Day Is Yours to Win” updates “Everybody Hurts” for the other side of despair, when optimism seeps back in. “Discoverer” and “All the Best” deliver sexy crunch for Monster fans. It’s R.E.M.’s many faces, collapsing into now.

Which isn’t to say there’s nothing novel happening: Michael Stipe’s vocals have rarely sounded richer or more vulnerable than on the spare, piano-led “Walk It Back,” and he invites a bunch of other voices to complement his own, including Eddie Vedder, Patti Smith, and Peaches, who adds a rich but distant layer to the head-rushing, raucous “Alligator Aviator Autopilot.” But Collapse mostly sounds like a familiar friend — reliable in all the best ways, but still capable of quietly insinuating surprises.