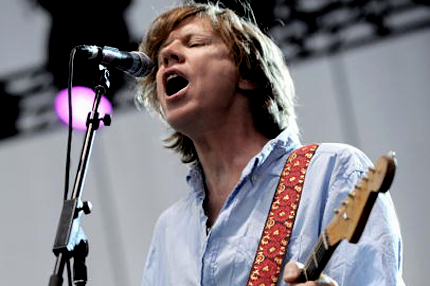 With more than 16 records released throughout the late-’80s and ’90s, Guided By Voices are one of the most influential indie-rock bands to emerge from the Golden Age of Alternative Rock. And now Robert Pollard’s crew of lo-fi slacker rockers are getting the full-blown tribute treatment from their peers on Sing for Your Meat, a compilation that features covers from ’90s icons like Lou Barlow, Thurston Moore, the Flaming Lips, the Breeders’ Kelley Deal, and others (available this spring). SPIN has an exclusive stream of Moore’s contribution: Check out his cover of GBV’s track “Stabbing a Star,” from their 1996 EP Sunfish Holy Breakfast, below.

Moore delivers a spot-on rendition of GBV’s lo-fi, one-and-a-half-minute oddity: the Sonic Youth guitarist conjures deranged riffage and squealing amp death over an awesomely ramshackle beat that sounds like it’s getting banged out on dented garbage cans. Moore’s been dabbling in lighter, more alt-country-esque fare on recent solo albums like 2007’s Trees Outside the Academy, but his cover of “Stabbing a Star”, which he recorded with his side-project Male Slut in the mid-’90s, is a refreshing reminder of his classic, punk-as-fuck 1995 solo album Psychic Hearts.