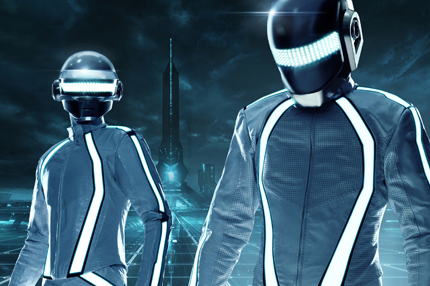 On April 5, Daft Punk’s soundtrack for Tron: Legacy will get the full-blown remix treatment, featuring re-tweaked cuts of the orchestral-dance soundtrack by top electronic artists like Moby, Boys Noize, M83, Teddybears, Paul Oakenfold and others. We’ve got an exclusive premiere of standout track “The Grid,” as remixed by dancefloor masters Crystal Method.

Daft Punk’s ominous original – which the duo cut with an 85-piece orchestra and rounded out with movie dialogue from Jeff Bridges – gets revamped by the Crystal Method to sound like a club-banger for the apocalypse, with zooming synth lines that slowly get replaced by the swelling strings of the movie’s main theme. Nice.

Disney, which is releasing the soundtrack, is also putting out a limited-edition vinyl release for Record Store Day. Tron: Legacy Translucence will feature four soundtrack cuts – “Derezzed,” “Tron Legacy,” “End of Line,” and “Castor” – on three slabs of colored red, blue, and yellow wax. Get more info about where to pick up a copy here.