No Blood, No Glory: Thrasher Party Wilding at SXSW 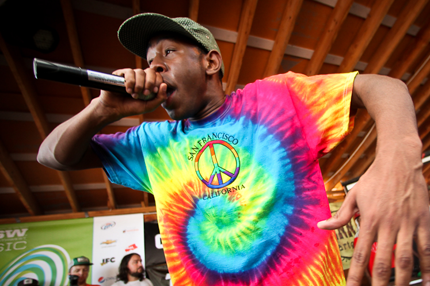 In a SXSW sideshow with no shortage of highlights — the proposition of Odd Future, Das Racist and a 40-year-old doom metal band sharing a bill hosted by Andrew W.K. frankly boggles the mind — there was an irrefutable apex to Friday’s Thrasher Magazine day party.

As Los Angeles rap misfits Odd Future wrapped up their second song, crew leader Tyler the Creator eyed the onstage double-stack of massive speakers with a wicked grin. He scaled the P.A. and pulled partner Hodgy Beats up behind him. Then, after delivering a verse of “French,” he leapt 20 feet down into the screaming crowd, who floated him unscathed back to the stage.

But that wasn’t the best part. Not to be outdone, Hodgy climbed from the speakers to the roof of the Scoot Inn’s outdoor stage, preceded to dance across the corrugated tin, and then dropped roughly three stories, feet first into the mosh pit. The audience went absolutely insane.

“This is the gnarliest shit I’ve ever been to,” said a wide-eyed Tyler. “I’ve got blood on my arm.” That turned out to belong to a kid named Kyle whose nose was broken along the way. Even he was ecstatic. Tyler called him up to the stage and he was a bloody, bubbling, beaming mess.

Mellowhype producer Left Brain, live beatsmith Syd and rapper Mike G (who earned his shine a cappella when the computer went on the fritz) all took turns surfing the crowd as well, which was an even split of longhaired skateboarders, sunglass-wearing hipsters and swagged-out rap fans. Andrew W.K. would’ve been there too, if he wasn’t (presumably) passed out by then.

The all-white-wearing party guru had been double-fisting cocktails and beer since the doors opened, and when Brooklyn’s Das Racist took the stage earlier, he was behind them, grooving and twitching in slow motion to “Who’s That? Brooown!” To put it plainly, he was stumbling drunk, but so was everyone else. Heems dropped a full Pabst after taking one gulp. Kool A.D. emptied one into the crowd. Guest Lakutis poured his PBR onto his head during “Amazing.”

Oddly, it worked — both as a highly entertaining alt-rap spectacle, and as the Animal House sequel that never happened. The guy standing in front of us actually had tiny pieces of fresh marijuana stuck in his hair. “We’re called the Vivian Girls,” joked Heems. Yeah, right.

Chances are Das Racist’s Ronnie James Dio send-up (“Rainbow in the Dark”) was missed by the members of legendary metal act Pentagram, who closed the show, but it’s pretty much expected that eccentric singer Bobby Liebling and his evil cohorts exist in their own world.

A bug-eyed demon with shocks of gray streaking his wild mane, Liebling growled his depressive poetry — “Sitting here waiting for the years to pass/They go nowhere/They just last and last” — while his bandmates shredded with abandon. The result was a near-perfect combination of Black Sabbath blues-fueled grind and the sludgy hard stuff associated with Queens of the Stone Age.

Meanwhile, behind the stage, the Thrasher half-pipe was packed with skateboarders of all ages grinding and catching air to the sound of four decades of Virginia-bred aural apocalypse. Nary a dull moment in Austin.