Stream the rockers' ambient track "Issho Ni," and pick up a collection of rarities and live tracks from R.E.M., Counting Crows and more. 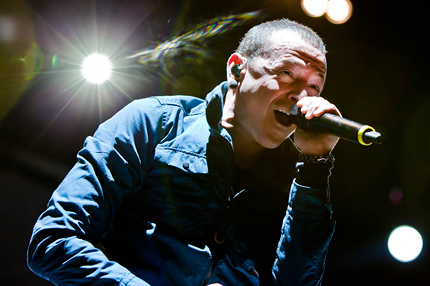 R.E.M., Slash, Counting Crows, Angels & Airwaves, and 13 other artists have teamed up to raise money for Japan earthquake victims on the new compilation Download to Donate, which features live tracks and deep cuts. Now Linkin Park have contributed a previously unreleased track titled “Issho Ni.” Stream it here or head over to Music For Relief’s official site to donate $10 and pick up the album.

“Issho Ni” is a ruminative, electronic ballad, powered by glitchy beats and dulcet keyboard melodies. It’s not your typical Linkin Park fare, and fans responded swiftly by saying they wish the song was more of an amped-up rocker. Singer Mike Shinoda answered by challenging fans to remix the track, which he will post on his official site in the coming weeks. “Sing, rap, rearrange, remix, write new material…whatever,” he wrote. But before you get creative, head to Download to Donate’s site to pick up the charity album.