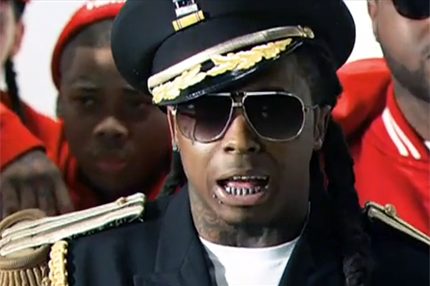 Lil Wayne’s first video since getting out of prison, set to premiere on MTV tonight, has hit the web early — and it offers a hilarious look inside the warped, overstuffed subconscious of one of the greatest rappers ever, Inception-style. Watch “6 Foot, 7 Foot” below.

In the clip, which is directed by Hype Williams, Wayne spoofs the Hollywood box office smash by recreating a few of the movie’s key scenes (the famous bathtub dunk and slo-mo van ride, for instance). But in Wayne’s subconscious, he’s a lasagna-scarfing, heavyweight-fighting, blunt-smoking, sprint-race-winning lady killer, surrounded by bills, bling and scantily clad babes. (Dig the subtle nod to Robert Palmer’s backup dancers from his “Addicted to Love” video). In fact, it doesn’t sound too far off from Wayne’s real life.

Wayne’s “6 Foot, 7 Foot” video also features the rapper’s newest protégé Cory Gunz, who Wayne hopes will break as big as his other Young Money artists like Nicki Minaj and Drake. “It’s like I’m forcing it on you: ‘You got to hear this,'” Wayne told MTV. “It made everybody who didn’t know Cory Gunz [say], ‘Who is that?'”