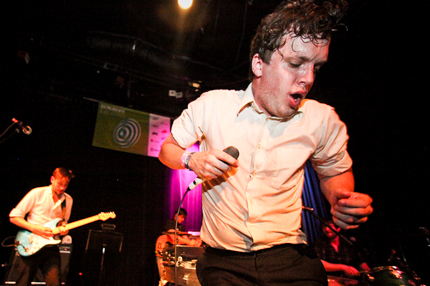 When Friendly Fires released their excellent debut album in 2009, the British quartet proved LCD Soundsystem weren’t the only band who knew how to throw a sweaty dance party. Thursday night, at a dingy loft space on the east side of Austin, the group returned to SXSW to throw one of the funkiest live sets of the fest so far, which included new tunes from their upcoming album Pala.

They may be a relatively new band, but they’ve nailed the art of compelling live performance. The key is frontman Ed MacFarlane, whose wild dance moves look like a cross between Elaine Benes’ demonic thrusting and David Bryne from Talking Head’s quirky jerks. Drummer Jack Savidge is also one of indie-rock’s best and most underrated groovemeisters, unleashing lockstep beats with the precision of James Brown sessionman Clyde Stubblefield or LCD’s Pat Mahoney.

Friendly Fires revisited plenty of tracks from their debut, and they sound far more confident and polished than two years ago, especially with the addition of a brass section on spastic funk numbers like “Lovesick.”

But the new tunes showed the band has evolved beyond the fly-off-the-rails spontaneity of tracks like “Jump in the Pool.” “Show Me Love” was a dark and funky number powered by keyboard lines reminiscent of Stevie Wonder, while “Hurting” broke down into a feverish jungle jam with horn tuttis straight out of Michael Jackson’s “Wanna Be Startin’ Somethin’.”

Not surprisingly, the band was dripping with sweat when they wrapped up their show around midnight, but like a true English gentleman, MacFarlane was polite to fans who stuck through the gig. “It’s been a true pleasure,” he said. “Austin has the friendliest people!”