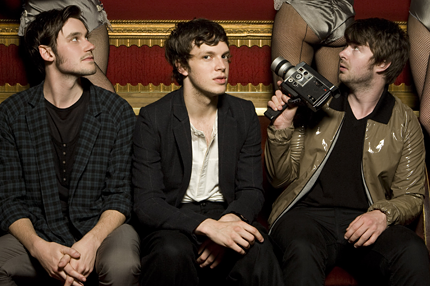 When Friendly Fires debuted new material from their upcoming disc Pala at SXSW, they delivered one of the best sets of this year’s fest – a sweaty, late-night dance party made all the more entertaining thanks to singer Ed MacFarlane’s weird Elaine Benes-style dance moves. Now the British dance-rockers have just dropped the first single, “Live Those Days Tonight,” from their new album, due out May 24.

On their excellent debut album, Ed MacFarlane and Co. delivered hyper-catchy, spastic dance-punk that sounded like a British version of Remain in Light-era Talking Heads. Tracks like “Jump in the Pool” had a fly-off-the-rails spontaneity that made it seem like everything would fall apart at any second. But the new “Live Those Days Tonight” shows these guys have tightened up their game: The production is crisper, the beats way trickier, and there are all sorts of atmospheric touches that make it seem like the band had an absolute blast messing around in the studio.