EXCLUSIVE: An Horse’s Melodic ‘Is It Love?’ Song

The Australian duo digs into email love on "Dressed Sharply," off their upcoming album. 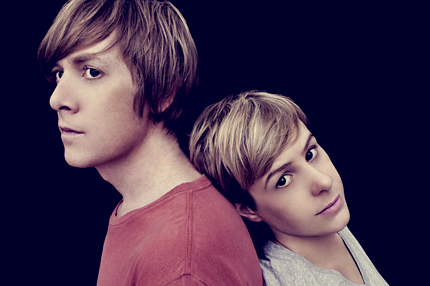 An Horse’s Kate Cooper isn’t one to let idle hours go to waste. “After [2009 album] Rearrange Beds came out, I had some time off in Los Angeles,” says the singer-guitarist, one half of the Aussie indie-pop duo (Damon Cox handles drums). “It was the first time in a long time that I had the opportunity to just sit around and write songs.”

The driving, crisply melodic “Dressed Sharply,” from the band’s upcoming Walls (April 26), came from those leisurely writing sessions. “I wrote it at like three or four morning — some ungodly hour,” says Cooper about the wonderfully giddy song, which finds her passionately singing, “Every word that you send me / I will read.”

“It’s about sending emails to someone who’s a friend and realizing that the relationship might be turning into something else,” she says. “Anyone in particular? “I’d rather leave it cryptic,” she says laughing.

As for the music, “we never try to do anything to specific when we go into the studio,” explains Cooper. “But we were consciously thinking about trying to make the drums and chords sound bigger than they had before.” Hence the song’s propulsive rhythms and buzzing guitar.