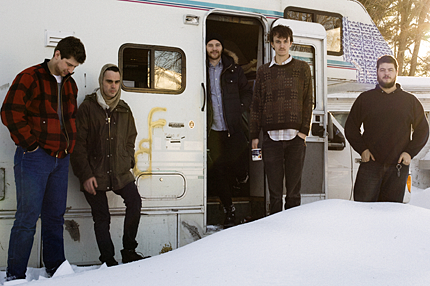 Dylan went electric, and now the Felice Brothers have gone electro — sort of. The rugged upstate New York folk troubadours will release their newest album Celebration, Florida on May 10, but SPIN has an exclusive first look at the genre-splicing song “Ponzi.”

In the menacing track, singer Ian Felice starts out by spinning an Elmore Leonard-style tale of sun-soaked greed and betrayal over a smoky piano and a trembling bass line.

But, like any Ponzi scheme, things aren’t quite what they seem. Halfway through, the song quickly transforms into a synth-heavy dancehall banger, complete with breathy vocals and a squiggly, throbbing synth hook. Surprisingly enough, it’s a great fit.

The group is in the middle of a cross-country trek that will include a set at Coachella and a July 30 stop at the Newport Folk Festival. Try to keep the “Judas!” jokes to a minimum.