Watch these rowdy southern rockers kill it live in Nashville. 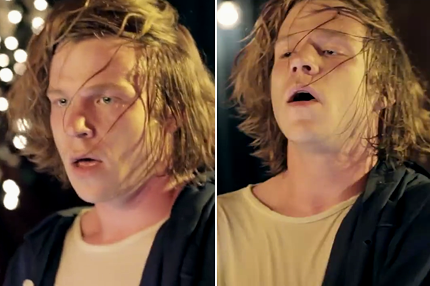 Kentucky rockers Cage the Elephant are touring the heck out of their sophomore album Thank You Happy Birthday — which debuted at No. 2 on the Billboard charts — and will continue their romp into the summer when they open for recent SPIN cover stars the Black Keys. During a stop in Nashville, the raucous quintet, known for their high-energy live shows, played a balls-out version of the new track “Indy Kidz,” which we’re premiering here. Check it out below and make sure to crank up the volume.

They performed in the packed basement of music city’s favorite record shop, Grimey’s. The best thing about the venue? It reminded the band of when they first started out. “Just going back to that really small performance environment where everyone was crowded in there all sweaty, people climbing and falling on the stage,” frontman Matt Shultz tells SPIN.

In the video, the lively showman alternates between electric body-spasms, arm-swirling dance moves, and the inevitable crashing to the floor. Somehow, Shultz’s hilarious lyrics — “while the world goes down the drain, I eat my popcorn from the bag” — remain audible. “There’s a lot of room for spontaneity when we play ‘Indy Kidz,'” Shultz says. Clearly.

What do you think of the band’s performance? Sound off in the comments!Scalable, non-watermarked