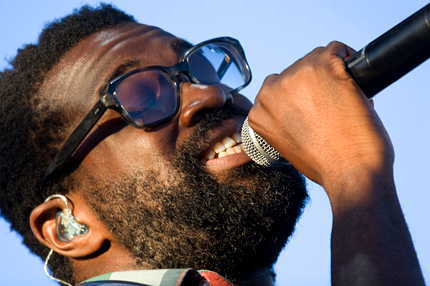 After releasing “Will Do,” the first track from their upcoming album Nine Types of Light, TV on the Radio have released the second track from the album, titled “Caffeinated Consciousness.” Pick it up in exchange for your email address below.

While the Brooklyn quartet showed a mellow side on “Will Do,” the band’s latest is a full-on, cacophonous rocker: multi-instrumentalist Dave Sitek, who produced the album, adds all sorts of cool sonic trickery (vicious horn stabs, guitar fuzz, fluttering synth tones) as singer Tunde Adebimpe shrieks and yelps lines like “We might not sleep tonight / Suffused are we to the cause of light!”

TV on the Radio will preview their new record next week, when they headline SPIN’s annual SXSW party, along with the Kills, OMD, OFF!, and Smith Westerns. They’ll also kick off a 14-date Spring tour on April 8 in Philadelphia and headline New York’s Radio City Music Hall on April 13. Nine Types of Light hits stores on April 12.