The Austin band releases MP3 of "Wake and Be Fine." 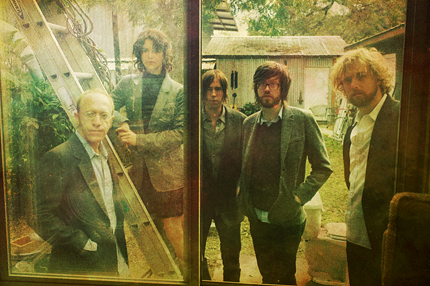 The walk-up to the May 10 release of I Am Very Far, the new album from Austin, Texas, folk rockers Okkervil River, began in January when they performed “Wake and Be Fine” on Late Night with Jimmy Fallon. Now, they’ve released that song as the record’s first MP3 leak. Download it using this widget:

(The email address goes to the band, not to SPIN)

“This arrangement has a lot of twists and turns and sudden stops in it,” frontman Will Sheff told SPIN recently of “Wake and Be Fine.” “I remember that during the 12-hour recording session for this one I started having this vision of myself as a rat running down a maze, having to turn right, then left, then right, then hit a button with my nose, everything at the exact right moment or I would ruin the whole song for everybody.”

Read the rest of Sheff’s track-by-track breakdown of I Am Very Far here.

The band, one of SPIN’s picks for the March 16-20 South by Southwest fest in Austin, kick off a U.S. tour May 31 in Atlanta, after several SXSW gigs, a Sheff solo date in London, and an opening spot for the Arcade Fire in Dallas. Click here for dates.

What do you think of “Wake and Be Fine”? Sound off in the comments