Watch the pop star's highly anticipated — but awkward — return to the spotlight on 'Good Morning America.' 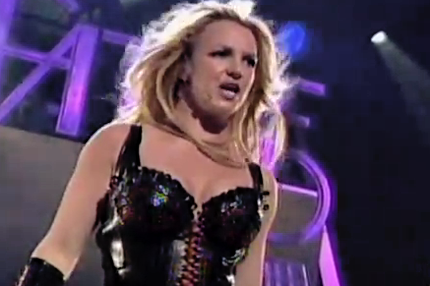 Britney Spears marked the release of her new album Femme Fatale today with a taped performance that aired on Good Morning America. The pop star – who is attempting a global comeback following her spectacular flameout in 2007 and subsequent Circus world tour in 2009 – performed two tracks from her album (“Hold It Against Me,” “Till the World Ends”), along with a medley that included the song “Big Fat Bass.” Her die-hard fans have been anxiously awaiting this first broadcast, but Spears’ performance didn’t quite hold up to the hype. Watch for yourself here.

Spears has always relied on lip-synching, as she does here, but what’s made her live shows so compelling is her tight, show-stopping choreography. With today’s performance, however, Spears looked like a shell of her former self. She opted simply to strut back and forth across the stage, teetering dangerously on her heels. Attempts to channel any sort of verve – such as her pop-and-lock move at 4:30 in “Big Fat Bass Medley” – came off awkwardly, a stark reminder of her disastrous “comeback” performance at the MTV VMAs in 2007.

In better news, SPIN calls Spears’ new album one of her best, mixing club tracks (“Till The World Ends”) with some of her most experimental songs ever (check out that dub-step breakdown in “Hold It Against Me”). But, judging by today’s GMA performance, girl needs much more practice on her live act. Even Enrique Iglesias thinks so.