Influenced by everything from soul to hip-hop to indie rock, the Brooklyn MC is one to watch this year. 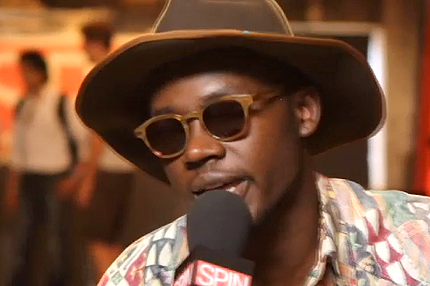 Last month, SPIN.com premiered Lovers Holiday, the new EP from Brooklyn rapper Theophilus London, and it was a breakout hit on the site. Then the lanky MC sold out a headline gig at the Music Hall of Williamsburg. We took notice, and wanted to hear more from him at SXSW.

“I just finished my record and we’re gonna rehearse for the whole month with a full band,” London told SPIN at the Shed studiosin Austin. “I’m not trying to be a jack of all trades…. The possibilities are endless. I’m just trying to write about this moment in time.”

Check out the full interview and get to know one of this year’s breakout stars.