On Wednesday night, SPIN’s Liner Notes series made its Los Angeles debut at the east side’s intimate Bootleg Theater, bringing together Scottish hard rockers Biffy Clyro and post-modern author Mark Danielewski to discuss, and demonstrate, the intersection of music and literature. The former named their fifth album, 2009’s Only Revolutions, after the latter’s celebrated 2006 novel, and they explored that connection over the course of the evening.

“I feel like your album and my book are these little kids playing together,” said Danielewski at one point. It proved to be an apt metaphor, as he and Biffy Clyro singer Simon Neil donned wigs — alien green and dirty blonde, respectively — along the way to trade lines from a steamy scene between the story’s protagonists, teen lovers Sam and Hailey. But mostly, the pair of headliners took turns reading and playing, with breaks to field questions from the enrapt audience.

Picking up the torch of the preceding four New York events (Tegan Quin, whose 2008 pairing with Augusten Burroughs launched the series, was in attendance), they were also there to raise money. The cause was acclaimed local gang intervention program Homeboy Industries, which provides counseling, education, job placement and even yoga for at-risk community members looking for a fresh start. They do tattoo removal too — an ironic endeavor for the famously inked Biffy to back.

For the band, this was completely new territory. “It’s tense,” joked bassist James Johnston as he set up onstage. Then he accidentally knocked his wine onto the floor. “Not tense anymore,” quipped Neil. But Danielewski didn’t miss a beat. “Let’s start at the beginning,” he intoned. “Imagine a boy …” And he continued, reading the exuberant opening words of Only Revolutions, a fantastic garble of nature-steeped prose and poetry leading up to the characters’ first encounter. 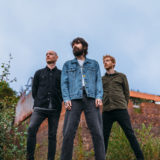 Neil strummed lightly underneath, then followed up with a rollicking acoustic version of Biffy’s “The Captain,” which with lines like, “I’ve swallowed half an hourglass,” and, “Let’s lock death away,” seemed a perfect fit for a tale of sweethearts attempting to outrun time. After performing sleepy folk ballad “God & Satan,” Neil explained that he’d read the book on his honeymoon after marrying his childhood sweetheart, and instantly knew he’d make an album inspired by it.

Interdisciplinary inspiration was a familiar theme to Danielewski, however, who wrote his cult-beloved 2000 novel House of Leaves in part as a companion piece to the album Haunted by Poe, a.k.a. his sister Annie. He talked about touring with her, and opening for Depeche Mode in Montreal, where he made an unfortunate wardrobe decision: “Big, billowy silk pants.” “Always a good look,” Neil responded. “I wish you were there to tell me that,” said Danielewski.

Later on, Neil dedicated the song “Mountains” to the author, stripping down the spiky Muse-meets-Dismemberment-Plan vibe of the original into a plaintively yearning backdrop for his grainy coo. Danielewski followed with his book’s heart-wrenching conclusion (one of two endings, depending on which cover you start from — the text runs both ways), and Biffy closed aptly with “Many of Horror,” featuring a lyric that cut to the heart of each Only Revolutions:

“I still believe it’s you and me to the end of time.”

biffy clyro, liner notes, mark danielewski, We Were There