Behind the Two Faces of the White Rapper

This week, Brandon Soderberg looks into the the landscape that Eminem and Asher Roth have passed down. 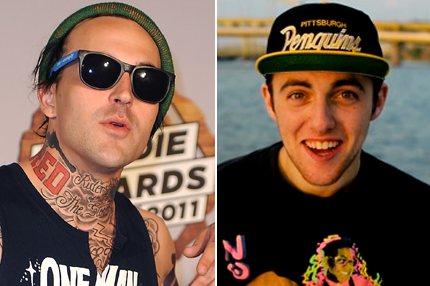 In the video for his song “Donald Trump,” Mac Miller, a scruffy 19-year-old white kid from Pittsburgh who looks more like Agent Cody Banks than hip-hop’s next big thing, bounces up and down, spitting well-worn boasts about bitches, partying, and his future success. Yet, people are actually listening to this guy. “Donald Trump” has more than one million views on YouTube. Miller’s on the cover of this month’s XXL as one of hip-hop’s promising “freshman.”

Gadsden, Alabama’s Yelawolf, a 31-year-old skate-punk, redneck rapper with a nimble flow and talent for novelistic detail, is part of this year’s “freshman” group, as well. Yelawolf was also on last month’s cover of XXL, along with hard-head, traditionalist supergroup Slaughterhouse, and Eminem (both Yela and Slaughterhouse are recent signees to Shady Records). White rappers, though still an anomaly, are not quite the joke they once were. Thanks to rap’s full-fledged entrance into the pop landscape, the white rapper and listener don’t necessarily look to hip-hop to dramatize their fantasies about black culture or tell them what’s cool to impersonate;rather, many white rappers and white rap fans genuinely relate to the music. The era of the suburban gangster is over.

But Mac Miller and Yelawolf represent two very different ways for white dudes to relate to hip-hop (and they’re not isolated examples). Both are rappers equipped with their own mini-movements: Miller is part of a rather strange but burgeoning “frat rap” sub-genre out of the northeastern and midwestern United States; and last week, Yela’s Slumerican imprint released White Jesus, a mixtape from southern rapper Rittz (like the cracker, get it?).

Rap trends move so fast these days that someone like Asher Roth — hip-hop’s previous great white hope — has already inspired another generation. Hence frat rap, a bunch of white college dudes rapping about weed and girls to mostly white audiences is, like, a thing right now. There is this Tumblr keeping track, and there’s a site called BroBible.Com, whichrecently posted a “College Rapper Database,” collecting rappers of many races (but with a heavy slant on big dopey white guys), who are all part of a scene singularly obsessed with mindless rhymes about matriculation.

Number 100 on BroBible’s database is a Northwestern college student who goes by the name Chet Haze (Mac Miller was number five, Asher Roth number one), who also happens to be Tom Hanks’ son. Haze, like so many white twenysomethings, is full of more nerve than talent, but is nevertheless working with Ski Beatz (producer for Jay-Z and Camp Lo, and recently, Curren$y); like Miller, he focuses exclusively on the PG-13 hedonism found in most modern radio rap. It seems that mainstream rap, having long abandoned street tales for simple platitudes about haters, drinking, drugging, and sex, very closely reflects the cushy life of, say, some douchebag undergrad. Frankly, it was only a matter of time before this happened.

Yelawolf finds plenty of time to party in his rhymes (see“I Just Wanna Party,” “In This Club”), but he’s just as willing to dig into his very specific, white trailer-park milieu, which is as far away from college as the rest of hip-hop. “Pop The Trunk,” is an excursion through three scenes of small-town violence. “Billy Crystal” is a bleary-eyed, cinematic portrait of a crystal meth dealer who is oddly sympathetic: “Momma stayed at work, daddy stayed in jail / Hey that’s a full deck / But you gotta play with what you’re dealt.” Yelawolf isn’t mining his own life so much as he is his environment, stacking up details of poor white living and boldly investigating the ways that such a life mirrors the supposedly quite different experiences of the rappers he grew up worshipping. Rather than cherry-pick the parts of hip-hop that apply to him, Yelawolf has sought out an interaction with hip-hop culture at-large.

Rittz has more fun with his whiteness, from the self-deprecating name to the absurd but actually kinda politically loaded title of his mixtape (indeed, Jesus wasn’t white). But his best asset is an unstoppable, rapid-fire flow that allows a flurry of details to spread across the track and nicely muck up expectations. White Jesus’s title track is mostly a platform for Rittz to exhibit his remarkable talent, but he quickly nods to his whiteness with the bitter line, “Motherfuckers say I disrespect the art form”; the song ends with a clip of Houston mega-church preacher Joel Osteen hawking self-fulfillment and success. In context, Osteen’s rap actually applies and we’re to take it unironically. Like Yelawolf’s sympathy for the trailer-park set, Rittz is taking a loaded southern cliché and turning it inside out.

The highlight of White Jesus, however, is “Nowhere To Run,” a hip-hop take on Merle Haggard’s “A Working Man Can’t Get Nowhere Today.” Rittz addresses the corner in which the world has painted him (“Rappin’ ain’t payin’ / Makin’ nine dollars an hour still”) and the one in which he’s painted himself (“Can’t afford to have a kid / Can’t afford to put my girl on the pill / Plus, I hate the way a condom feels”), leaning heavily on class-conscious details. Perhaps the most poignant moment, though, are the few lines that address his relative rap fame, noting his family’s lack of support from the start, and their currently conflicted response: “I be smiling now, when they tell me they’re proud / But then they turn around and say some racist shit.” Rittz cleverly reveals a generation gap there: Between his parents’ older, still-there racism and his generation’s very real love of hip-hop.

It’s an interesting white rapper reality, while also managing to avoid privilege and Eminem’s cloying, underdog stance too. It’s the sort of detail that frat rap, which is about fun and partying, just doesn’t have any time for. Frat rappers have found something that genuinely speaks to them in hip-hop’s hedonism, but that’s all they’ve found. They lack the occasional insight, roundabout commentary, and quality rapping to support such freaky tales. Fortunately, Yelawolf and Rittz have no problem resolving the smart-dumb aspects of hip-hop. They’re the not-so goofy future of white rap.