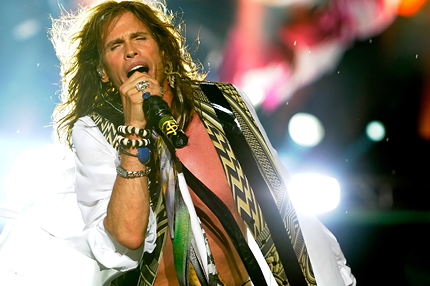 Steven Tyler may be focused on judging this season of American Idol but he’s already plotting Aerosmith’s return with their first album in seven years.

On his Twitter earlier this week, Tyler announced the band is heading back into the studio this summer to record the first album since 2004’s Honkin on Bobo, following news that they will head out for a tour later this year.

“AEROFREAKSREJOICE,” Tyler posted. “Joe & I sent smoke signals… shot the shit & chewed the fat for the last year… but just smoked the peace pipe for an hour today and are on our way to rock’in your fkin worlds this summer by locking our selves [sic] away somewhere w/ guitars and drums.”

Tyler has had a tumultuous relationship with his bandmates in the past years. When he entered rehab for painkiller addiction last February, Tyler and his management threatened legal action should the band continue to tour without him. And when Tyler rejoined the group for a string of shows following rehab, he appeared to get into on-stage spats with the band, including one gig where Perry appeared to push Tyler off the stage during a performance of “Love in an Elevator.”

Tyler has also been mysterious with his band about his side-projects: Perry said he discovered Tyler’s plans for Idol through media reports. “I found out on the internet like the rest of the world,” he said.