Frontman Brendon Urie on the emo-pop band's just-released clip for "The Ballad of Mona Lisa." 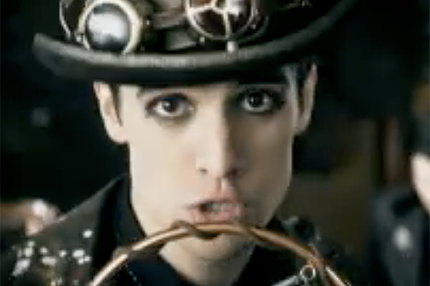 Panic! at the Disco just dropped the music video for “The Ballad of Mona Lisa,” the first single from their March 29 album Vices & Virtues. What do we learn? That after losing two members over “musical differences,” Panic! are back in all their hyper-dramatic emo-pop glory: “I’ve missed wearing costumes and makeup,” frontman Brendon Urie tells SPIN. “I love throwing a big production.” Watch below!

The video is a creep-tastic funeral scene with a 19th-century steampunk vibe — top hats, elaborate suits with coattails, and long Victorian-era dresses. Think a goth-tinged Sherlock Holmes — you know, sort of like Marilyn Manson and Dita Von Teese’s wedding.

“It definitely has an eerie vibe to it,” Urie says of the video, directed by the band’s go-to video guy Shane Drake (Fall Out Boy, Paramore). “[Shane] had this idea of an Irish wake. But it’s not completely sad; it’s more of a celebration. But there’s a twist — we are all about the twist! It was a full day of shooting and it was amazing. We shot it at a ranch where the show Deadwood is filmed.”

The song is deeply personal, say Urie. “On the surface it can seem like just the story of drama between a guy and a girl,” he explains. “But it’s really about what I’ve been going through, an inner-struggle within myself, and fighting the dualities of my personality — the side that fucks everything up and destroys everything and the other side that tries to pick up the slack.”

Watch Panic!’s video for “The Ballad of Mona Lisa” below, then sound off in the comment section. For more on Vices & Virtues, read our feature story here.

WATCH: Panic! at the Disco’s “The Ballad of Mona Lisa”

William Goodman
Tags: panic at the disco, the wire, Videos