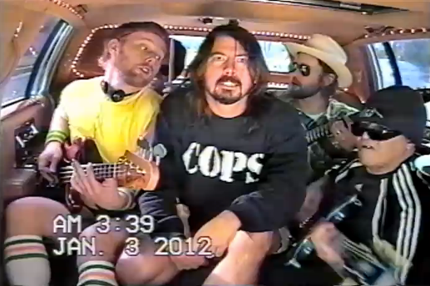 After teasing snippets of songs off their forthcoming, as-yet-untitled album, out April 12, the band has now dropped a full music video for lead single “White Limo.” Watch it below!

In the clip, filmed in typically campy Foo Fighters style, Motorhead’s main man Lemmy drives a vintage white Cadillac limo through Los Angeles while the various members of the band — including back-in-the-fold axeman Pat Smear — pile in back, before rocking out alongside the ride. But Lemmy’s hard partying ways ultimately lead to disaster.

The song is a total rager, with frontman Dave Grohl wailing out the lines in a sandpapered howl, by far one of the most aggressive tracks the band’s ever released.

Watch the clip and tell us what you think in the comments.