The Grammy-winning British diva plays a 45-minute gig in the Late Show studios! 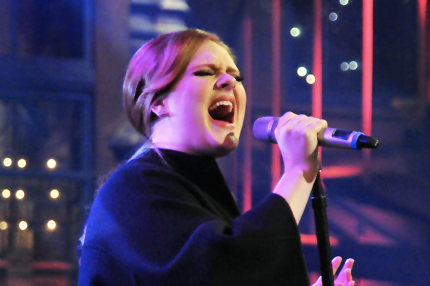 The Grammys only aired a week ago, but we’re already counting the nominations Brit singer Adele should earn for next year’s ceremony. Her powerful sophomore set, 21, hit stores today, and she celebrated by performing a full concert yesterday at The Late Show’s NYC studios. Watch it below!

If you’ve only heard Adele’s music but never seen her perform, the 45-minute set will provide not only soulful cuts from both 21 and her award-winning debut, 19, delivered with her crack backing band and singers in tow, but also loads of delightfully self-deprecating and honest banter between songs.

For fans in North America, it’s the only time you’ll be able to see an Adele gig until later this year: Her tour kicks off May 12 in Washington, D.C. See the full itinerary here.