Soundgarden Working On New Album for 2011

"We have some cool new songs that we are going to record very soon," the band reveals. 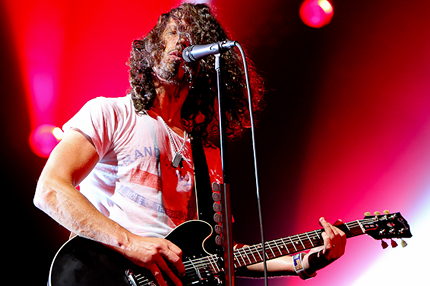 One of the biggest comeback stories of 2010 was Seattle grunge legends Soundgarden. The quartet reunited and triumphantly played Lollapalooza. But no follow-up dates were announced, and speculation about their future abounds. “Now what?” SPIN asked in our September cover story. Well, it seems we finally have our answer: Chris Cornell and Co. are, in fact, working on a new studio album.

In a post to their website titled, “Our goal for 2011 — Let’s Make a Record,”the band — Cornell, guitarist Kim Thayil, drummer Matt Cameron, and bassist Ben Shepherd — gave fans the news they were hoping for. “Over the past few months, we’ve been busy jamming, writing and hanging out together — exploring the creative aspect of being Soundgarden,” the post reads. “It feels great. We have some cool new songs that we are going to record very soon.”

No word on when “very soon” is. But at least two members have busy schedules starting later this spring: Cornell is heading out on a solo tour, playing songs from his entire catalogue, and Cameron will start revving up for the 20th anniversary of his other band, Pearl Jam, which will celebrate with a box-set, tour, and their own summer festival.

Are you excited for Soundgarden’s comeback album? Tell us in the comment section.