The pop star mixes sexual imagery with a "deeper message" in new clip. 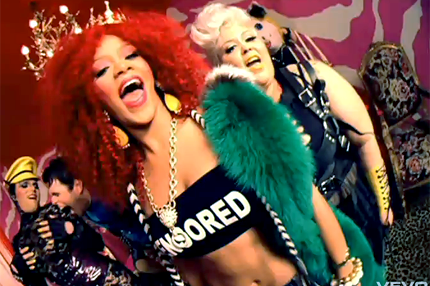 On her latest album Loud, Rihanna delivers one of her raciest lyrics ever on the track “S&M.” “Sticks and stones may break my bones / But chains and whips excite me,” she sings on the gritty electro-banger. And now the singer has released a sexually-charged new video crammed with all sorts of S&M references, from whips to ball-gags. It’s the type of video that would’ve had Tipper Gore’s PMRC freaking out in ’90s but nowadays is available with the quick click of a mouse on YouTube. Watch it below.

Rihanna recently told SPIN that “S&M” was intended to have a deeper message beyond cheap sexual thrills. “I don’t think of this in a sexual way,” she said. “It’s more about people are going to talk about you…you can’t stop that.”

And with the new video, it’s clear she’s referring to the relentless tabloid coverage in the wake of her Chris Brown scandal – only this time Rihanna gets to exact her revenge. The clip features reporters at a press conference sporting ball-gags while Rihanna parades blogger Perez Hilton on a dog leash. Oh, yeah: Rihanna also inexplicably fellates a banana, makes out with a woman, and writhes around on a fuzzy carpet while tied up in fluorescent pink rope.

Is Rihanna’s video too racy – or too tame? Sound off in the comments.